If you have had a look at YouTube fitness recently, you would have seen that Greg Doucette’s (or Remington James’s) recipe for Anabolic French toast. Everyone has been making it and trying it. It has even had a challenge. I have put off trying it for ages but have now made it and tried it and so feel like it is time to give a full review.

We will run through everything. Prepping it, Cooking it, eating it and even what it is like to meal prep. We shall start with the Anabolic French Toast back story.

So everyone loves French toast, but a fitness Coach/Youtuber called Greg Doucette made a recipe called “Anabolic French Toast”. Which another Youtuber caller Remington James modified a bit and released as well. Both very good recipes by the way.

These recipes use normal bread and fill it with a load of protein and flavour and make it super simple and easy to have a filling and tasty French toast breakfast. Anyway, there have been several pictures and videos all over Instagram of this recipe and I wasn’t in a rush to try it, as much as I love cinnamon, it didn’t seem like something I was going to enjoy! Then, one weekend I went out for an early morning run (Check out this blog to see why), came back and needed some food. Don’t ask why but I decided to give it a go. I had all the ingredients. So how did I get on?

It is very simple to cook Anabolic French Toast, the hardest process is prepping the “batter”. Which isn’t even that hard (only 4-5 Ingredients). Just takes a while to mix all the ingredients. Once you have soaked the bread to cook it Is very simple. Throw them in a frying pan and fry off each side until crispy. Then flip it and repeat.

The only issue I had is I was having four slices and my frying pan isn’t big enough for all four slices. So I was doing two at a time. Not that this is a huge issue, just takes a bit more time.

One thing I did find is that as good as the recipes were, I had to make some adjustments to the number of egg whites. Some bread will soak up loads, some won’t soak up much. So you have to play it by eye and make adjustments as you go. Same with flavour and sweeter. Take notes of what you liked and didn’t like and build your recipe. I have found I love a lot of cinnamon! 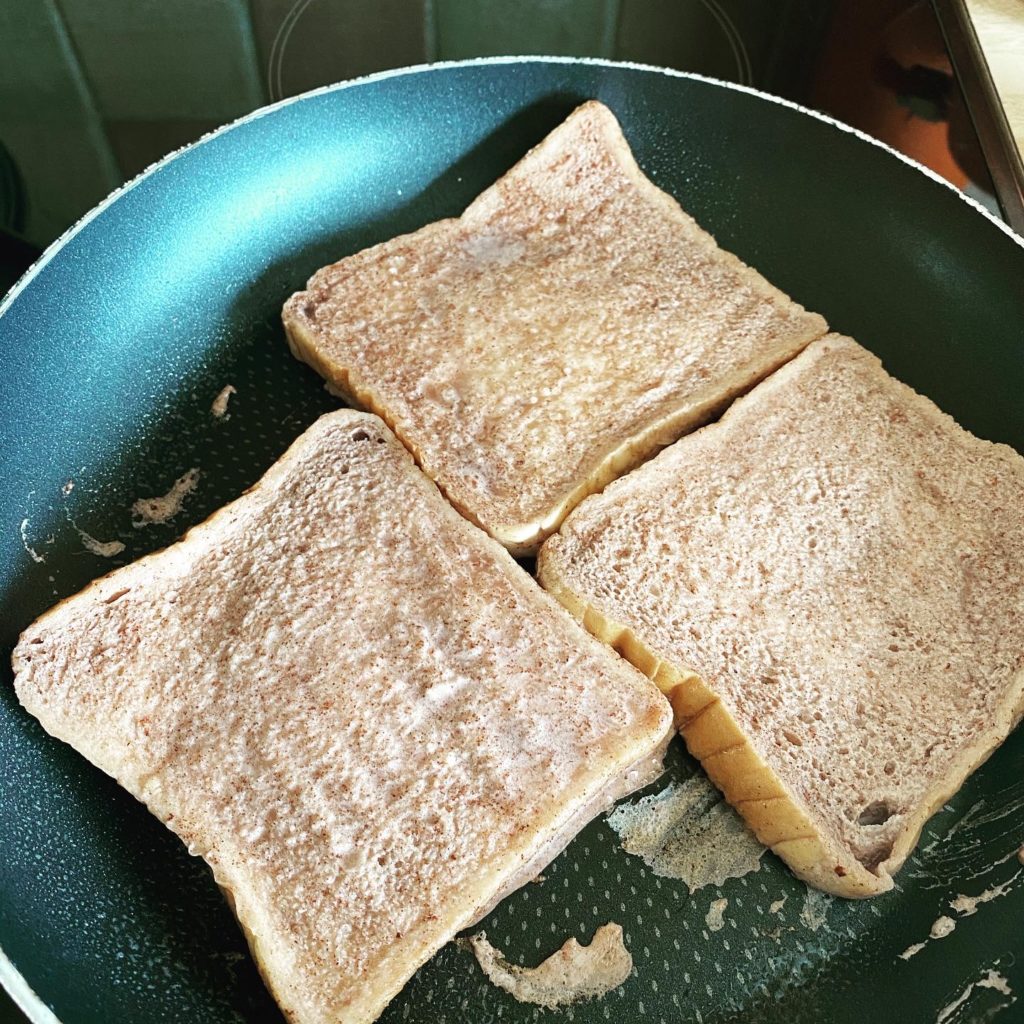 HOW WAS THE TASTE?

The taste? Is amazing! Proper tasty! As I have mentioned above, even if you follow Greg’s recipe exactly, you will have to make changes. I love cinnamon so I made a note to add more cinnamon and also add more sweetener. However, when eating it just take mental notes and next time you cook it you can make adjustments.

If you enjoy cinnamon rolls/swirls you are going to love these! the cinnamon mixed with the raspberry yoghurt was a great combination. Great flavour! Very enjoyable meal to eat. Which is important when dieting

The taste is very nice, very sweet and tasty. As I have mentioned above you can add and remove stuff as you pleased. You could even add fruit on top and customise it even more. It is the perfect meal for customisation. 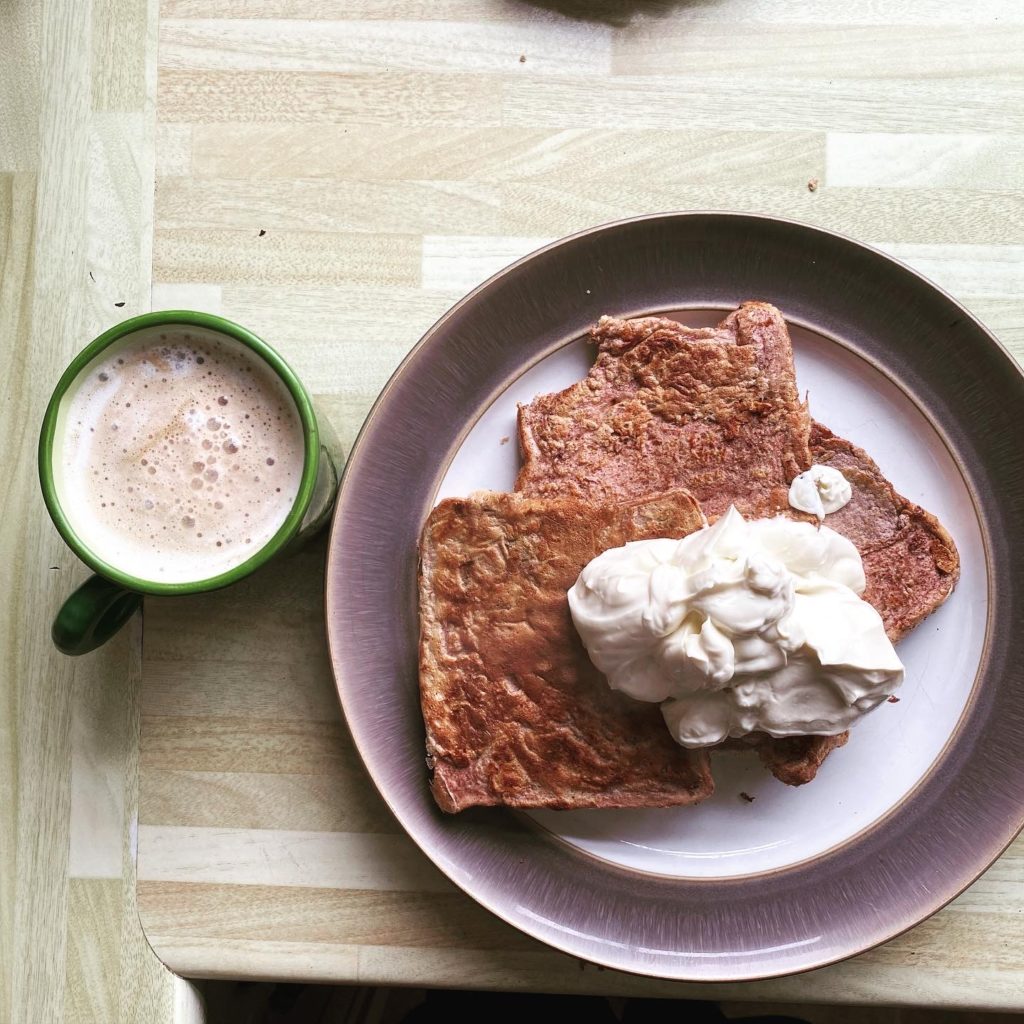 ARE YOU GOING TO HAVE IT AGAIN?

What I was shocked by is how filling it is! 4 slices of white bread, egg whites and protein yoghurt on top and you will struggle to finish it. This meal is so filling. So much so I have decided to skip breakfast so I can have more slices for lunch and that will fill me up till dinner. Perfect if you are on a low-calorie diet.

If you are bulking I would say this is the perfect meal for you! You can just add more egg whites and more bread and you will have a higher calorie meal. You can even add things on top to bring the calorie count up.

It is also worth mentioning that both Greg and Remington James mention meal prepping this Anabolic French Toast. It made me wonder how it would taste re-heated. I decided to “toast” them to reheat them. Threw them under the grill for a few minutes to heat the Anabolic French Toast slices. Tasted amazing. I would say it made it even more crispy.

So, overall I would say I was impressed with the Anabolic French toast recipe. Since first trying it, I have had it every day for lunch so far. It is super tasty, can be topped with any, highly customisable and extremely filling! As I am adding fat-free yoghurt to the tip, the volume of food is huge. I don’t get any cravings until dinner time!

I highly recommend you check the Anabolic French toast recipes out! Give them a go and see what you think! If you do give them a go make sure to tag us on Instagram in your creations! We would love to see what you all come up with.

If you want to find out your Macros/Daily Calories then check out our app for a free calculator.

Kieran is the CEO and Founder of Sets & Reps. He decided to make an application that helped people get a gym workout when not at the gym. He designed, Coded and built the application himself.

One thought on “Anabolic French Toast Review – Well, We finally tried it!”