If you have ever had anything to do with CrossFit or been near someone doing CrossFit, you would have heard or seen the Nike Metcon. This is, for a lot of people, the best around workout shoe. It may come as a surprise but I have never tried a Nike Metcon. So I thought I would give them ago and give out full Nike Metcon 7 Review!

Newly released I  managed to grab a pair from WIT fitness (A great website, highly recommend it). I have now worn them for a few sessions and done various exercises and workouts in them so thought it might be worth giving my opinion on the new Nike Metcon 7’s as someone who has never tried a Metcon before. 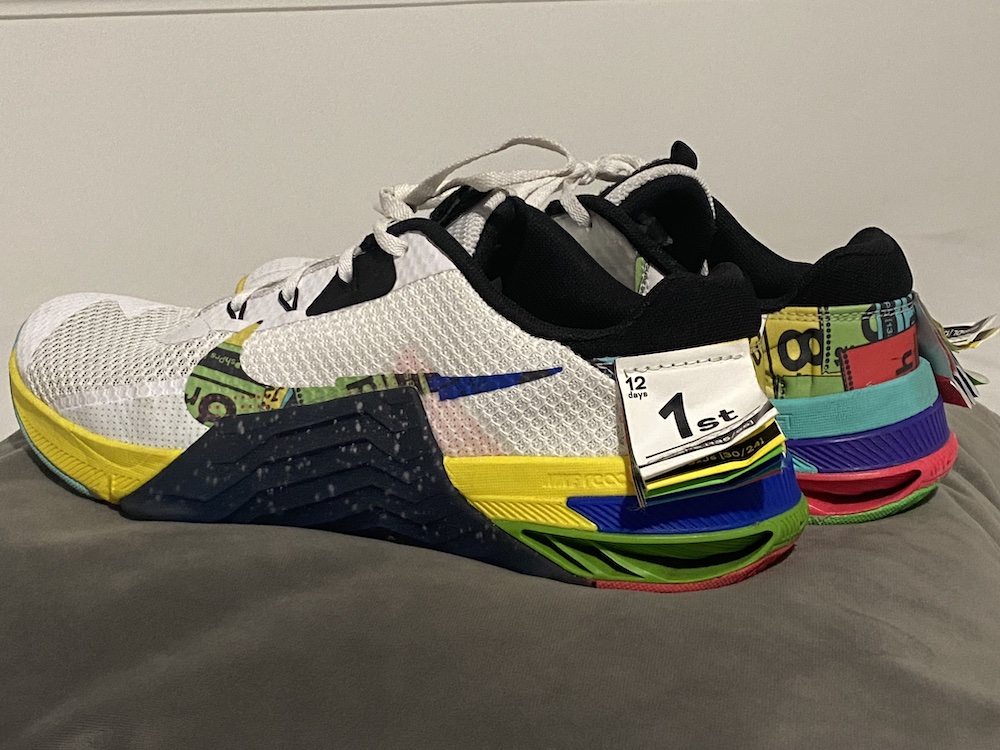 So these shoes aren’t cheap, they retail around the £120 mark. Fortunately, I managed to find a discount code that brought them down to £100. So was a tidy saving, it also qualified me for free delivery. They are not cheap by any standard, You can get cheaper shoes out there, even trainers that are made by Nike can be cheaper, however, Are these shoes worth it? Well, we will get onto that shortly.

Delivery was fast and arrived in two days, the box was damage-free and packaged well. No complaints about the delivery what’s so ever. Nothing to do with the shoes but was happy with my service from WIT fitness and would happily purchase from them again.

After opening the box and seeing the Metcon 7’s for the first time I was surprised at how big they were. I thought they were a smaller shoe, however, after comparing with a friend Metcon 6 in the gym, they are a bit chunkier than the previous model.

The colourway was lovey and eye-catching and different. The version I got comes with these tags on the side of the shoe, not sure what these are about and they look a little bit silly, but I will keep them on there for now.

Picking them up I would say they are light for your average trainer but are an average weight for a high-end workout trainer. For comparison, my pair of Nobull’s weigh 297g and my Under Armour Regions are 333g and the Nike’s come in at 384g. So in theory they are the heaviest, which is surprising because they feel lighter than the Under Armours. The NoBull’s are lighter than them both. 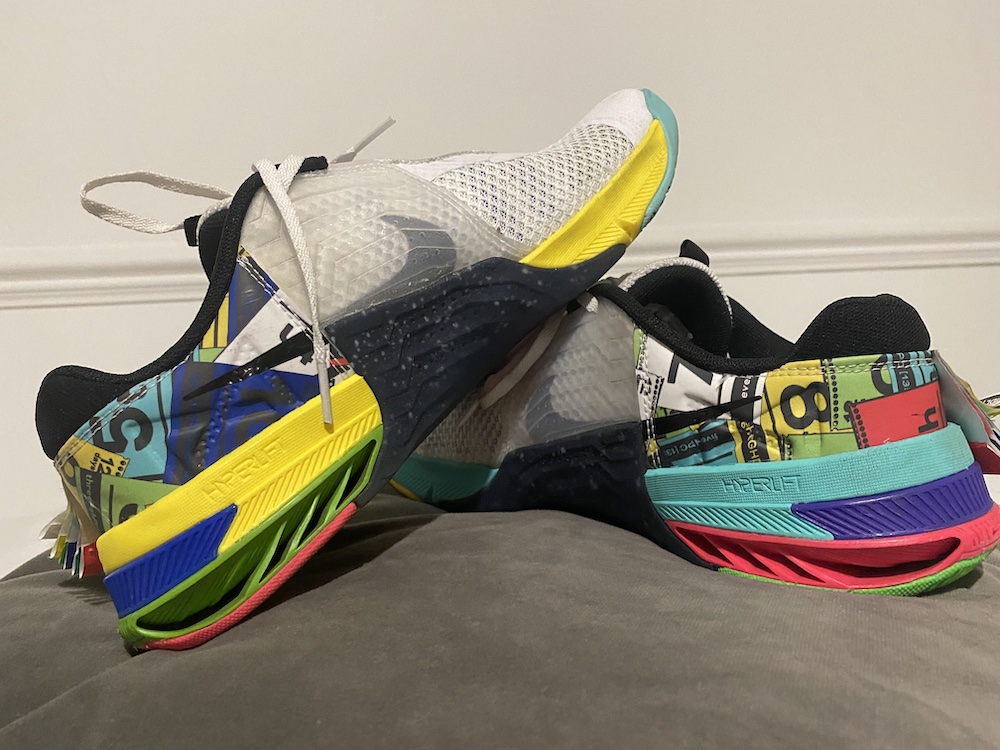 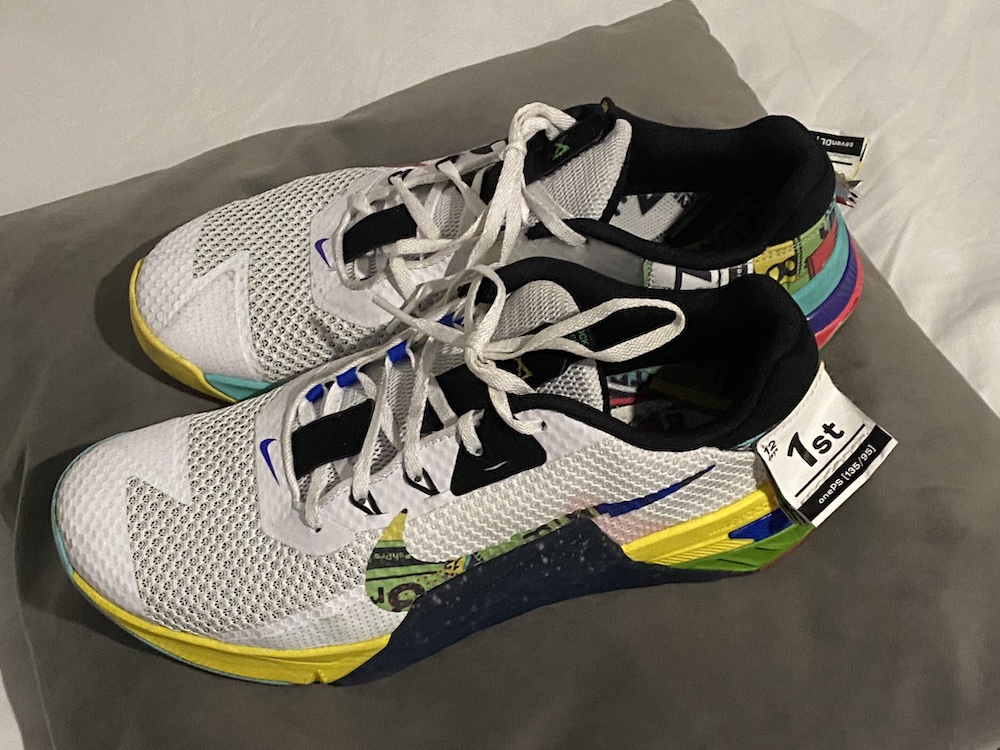 HOW DO THEY HOLD UP IN A WORKOUT

Rock-solid! No noises, they don’t rub and are super comfortable. When first taking them out of the box I thought they were heavier than I would expect, however, wearing them you don’t notice they are on your feet, if I compare this to the Under Armour’s, I do tend to notice them on my feet and they do feel heavier. (Even though they aren’t heavier) I have performed various workouts with them now and they haven’t been faulted in any of them. They are comfy, the toe box allows your toes to maintain a natural position.

I have worn them for a few high-intensity workouts and also a fast walk on the treadmill and both occasions, they performed perfectly.

WHAT ABOUT THE BIG LIFTS

I haven’t tried squatting in them yet as squats aren’t currently in my plan, however, they perform amazing on the leg press. My feet feel solid and stable and I don’t feel an Ankle roll or any “spongey” feeling under my feet. I have worn them for many deadlift sessions and they feel supported and offer great stability. 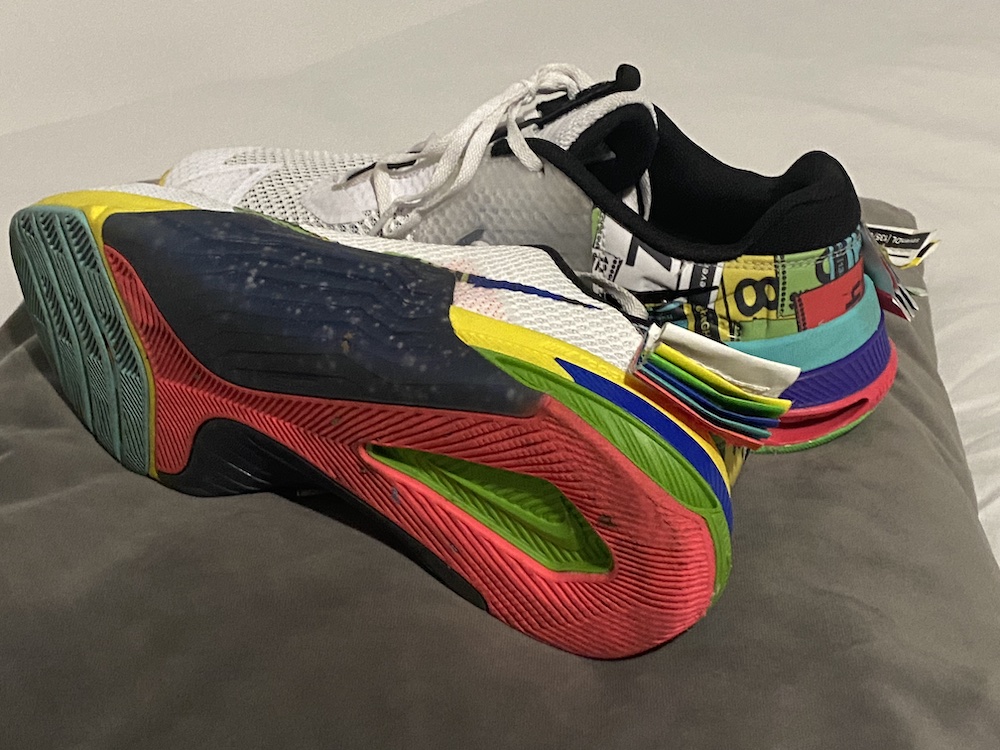 During a bench press, it is nice that the toe box allows you to “grip” with your toes. Weird thing to state but it is a massive difference compared to a tight-fitting running trainer. Something you notice virtually instantly.

The only things I don’t like, and they are very minor is the size of the box they came in felt bigger than most shoe boxes. I can’t confirm if it is or not but not a huge fan of wasted packaging.

Also, as mentioned not a huge fan of the tags they have put on them! However, they aren’t on the standard Metcon 7’s only on this colourway. So if you buy a standard colourway they won’t have the tags hanging off them. Apart from that, there isn’t much I don’t like about them.

Also, they are expensive, there is no getting over that! This is going to be an expensive purchase for a pair of trainers! However, do I think they are worth it? If you are serious about training and want to improve every aspect then yes. These will help with grip and stability during lifts and also allow your feet and toes to be comfortable during workouts. 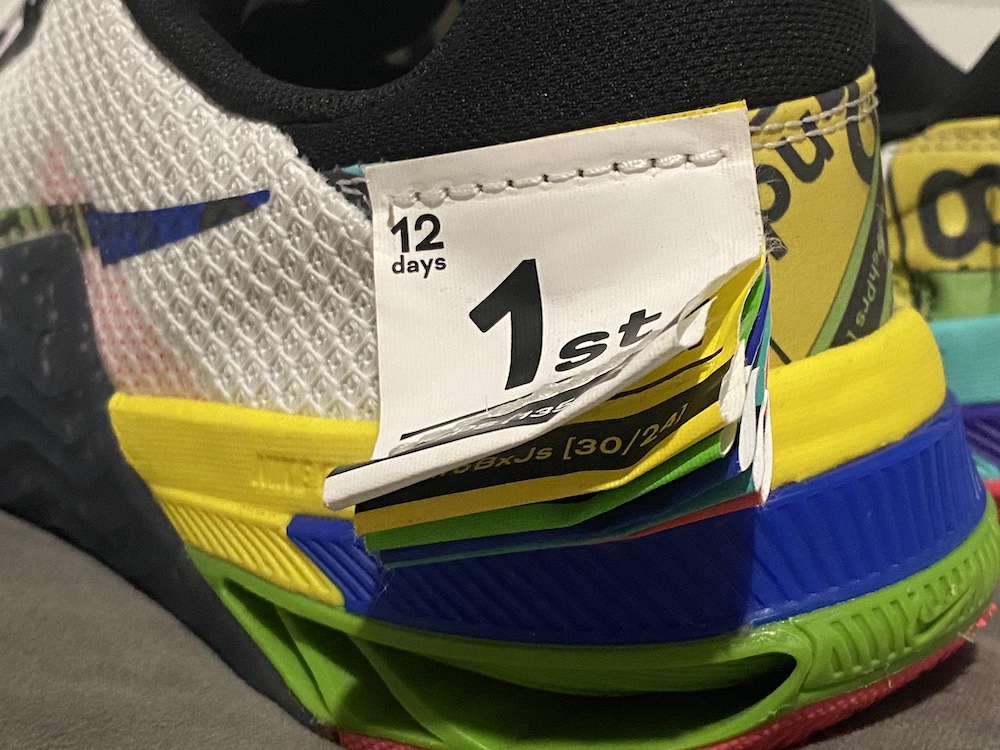 So that was our Nike Metcon 7 Review! Would I recommend you try a pair of Nike met on 7’s out? 100% I wouldn’t say you need to throw your current trainer out, but if you are in the market for a new trainer then I would highly recommend you give the Nike’s ago. I love the colourway I bought it but the tags confuse me, I don’t understand why they are on there.

If you shop around and look for codes I am sure you will be able to find them at a good price. It will just be a case of finding somewhere that has them at a good price in your shoe size in stock. Do you agree with our Nike Metcon 7 Review? Let us know what you think! We would love to hear from you all! 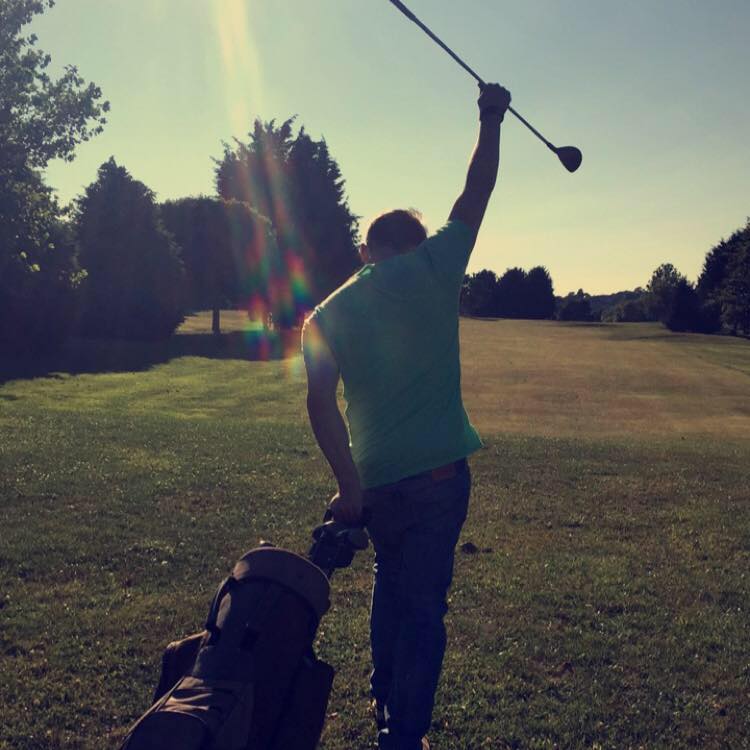 Kieran is the CEO and Founder of Sets & Reps. He decided to make an application that helped people get a gym workout when not at the gym. He designed, Coded and built the application himself.